Harry Potter has not lost its magic but continues to draw new fans and also excite the old ones. Many of us have either hosted or attended Harry Potter themed parties.

And those parties are always awesome! Drinking butterbeer and playing Quidditch never gets old. But if you’d like to have a new twist to your themed party I have a few ideas for you. The “themes within a theme” :).

This fun sporting event would be a perfect theme for Harry Potter party!

Wizards from all over the world gathered to this amazing competition to cheer on their favorite players. 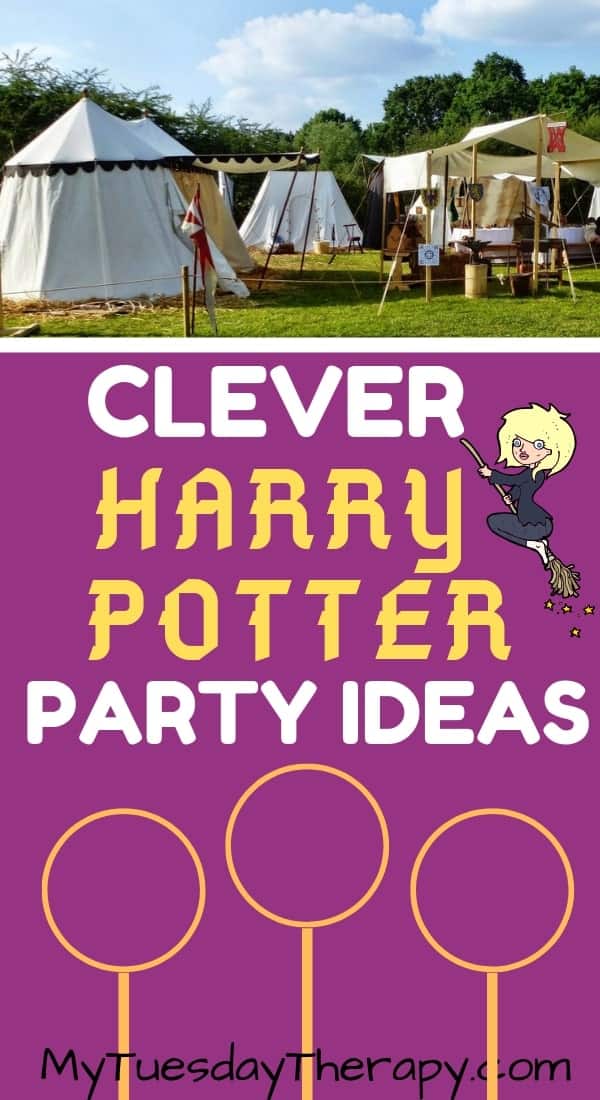 You will earn the Awesome Hostess award by hosting this event followed by a big sleepover in the backyard!

It can seem like quite the hassle to build your quidditch game but it will be all worth it. You’ll find many tutorials online.

Though, you won’t be flying on the broomsticks, I bet this will be a party they will talk about long after. You’ll have fun playing the Quidditch game and eating special theme fitting food.

In addition to the Quidditch essentials you might need

2. Camp in the Forest of Dean

Harry and Ron found the Gryffindor Sword in a pond in the Forest of Dean. Ron used the sword to destroy the horcrux locket. 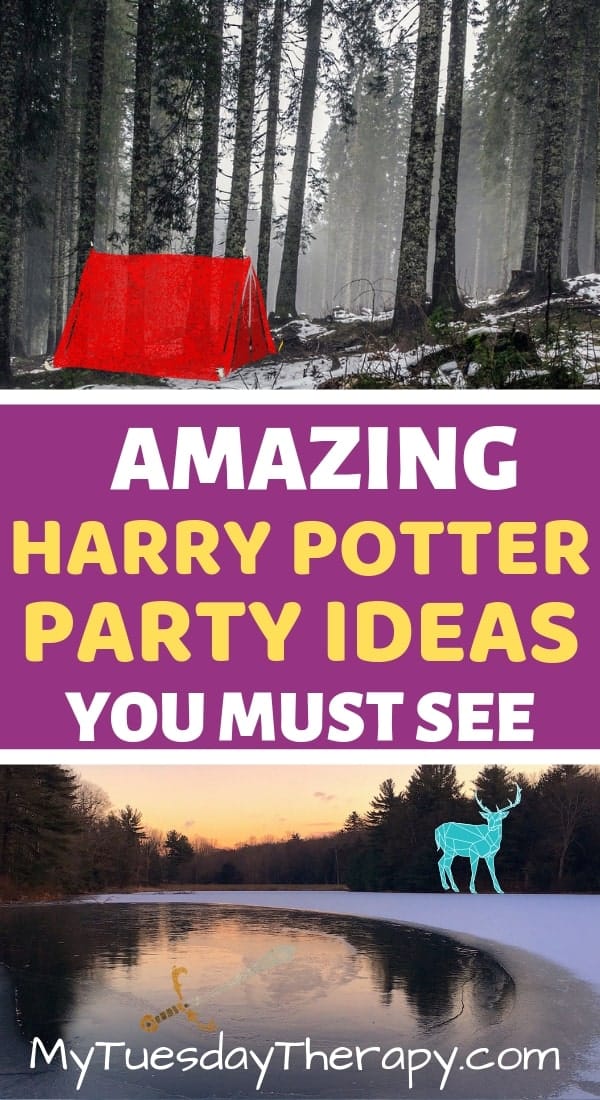 Set up a tent and have a sleepover outdoors.

Sit by campfire and tell stories while roasting marshmallows.

A scavenger hunt looking for the Gryffindor Sword would be pretty fun.

This would be an awesome Harry Potter birthday party idea for a teen.

3. Shop in The Diagon Alley

Create your Leaky Cauldron entrance to your party. Appoint the special brick that needs to be tapped three times for the door to open to the Diagon Alley.

Set up a few shops in your party area and organize awesome activities in them.

Your kids and guests will have a terrific time wondering around Diagon Alley. Eat cake and other goodies in one of the many cafes in Diagon Alley or have treats in each shop. 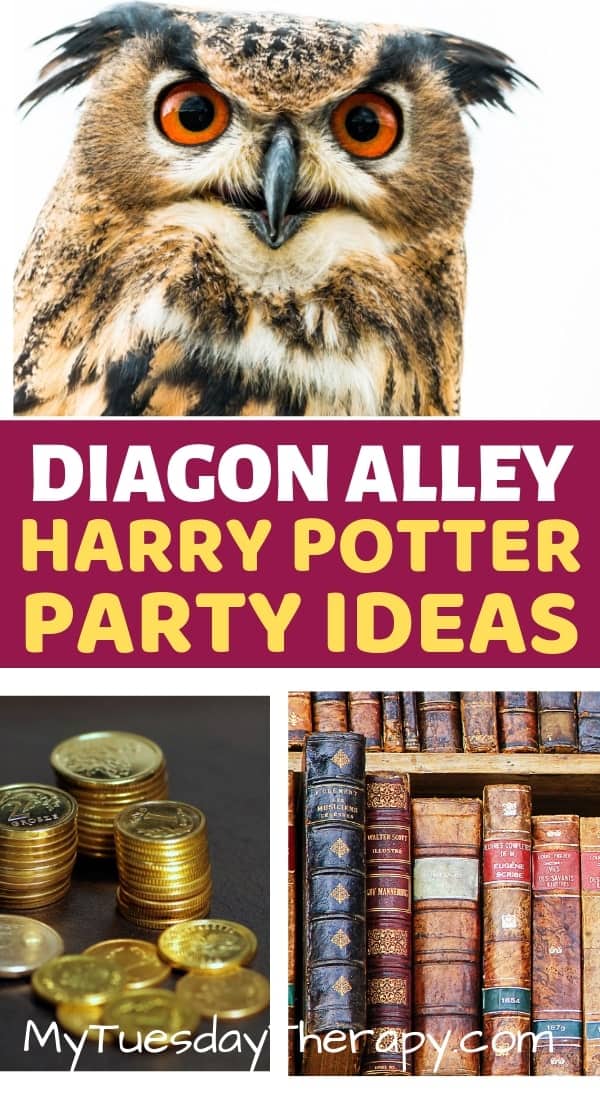 A bookstore where most of the Hogwarts students purchased their school books. 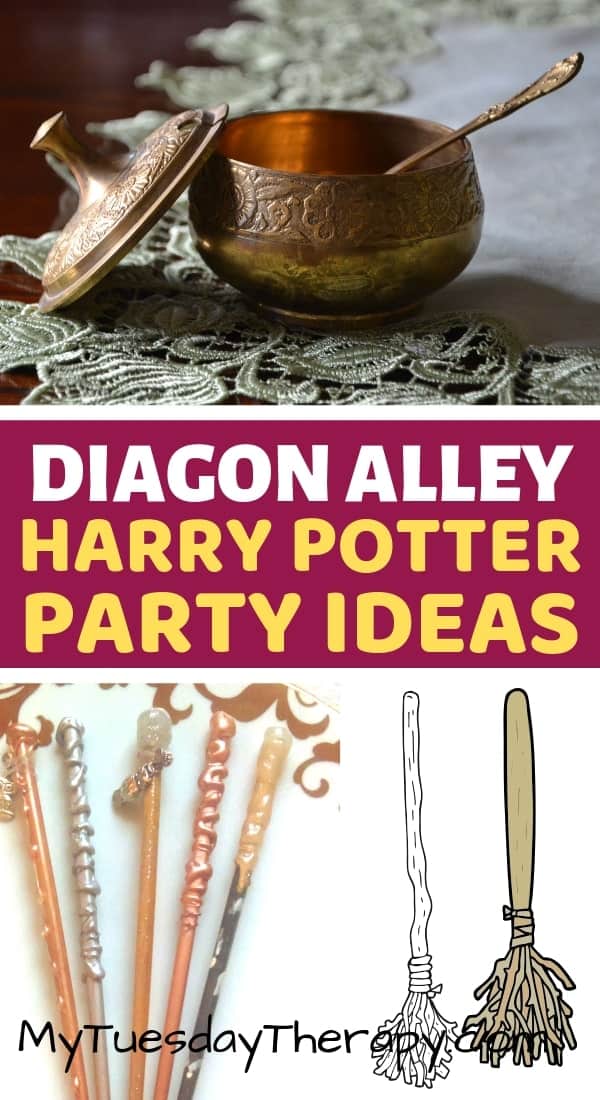 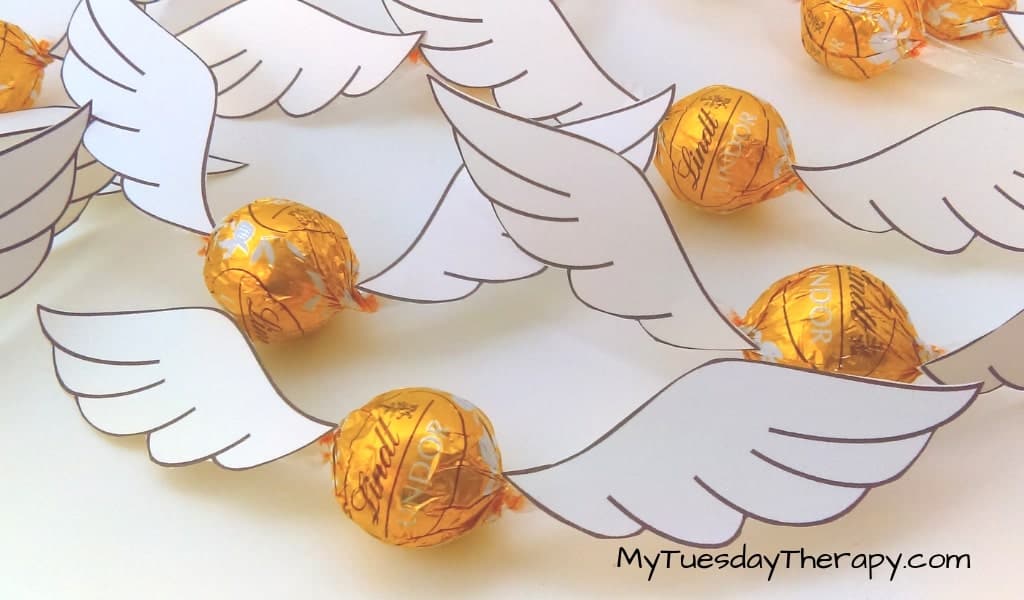 I’m not into pranks etc but if you can come up with a few harmless things to put in your joke shop I think your party guests will love it!

This party is probably the most common Harry Potter party nevertheless it is always a hoot.

You can sort your guests into houses in many different ways:

Host a Welcome Feast in the Great Hall with lots and lots of food served from gold plates. The floating candles shimmering in the otherwise dark hall. Check out the ideas at HARRY POTTER PARTY ON SMALL BUDGET

Always one of the favorite ones. The kids have a blast making their potions. 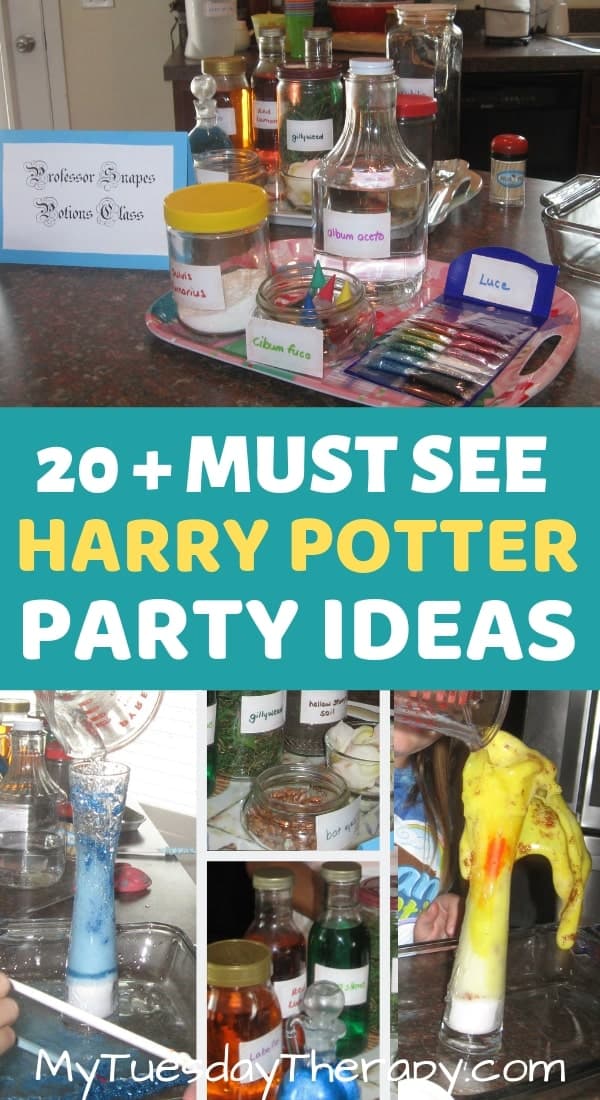 We had various ingredients in the bottles such as

I used the google translator to give some of the ingredients their latin names.

Teach a few wand moves and learn a couple of charms like Wingardium Leviosa and Alohomora. 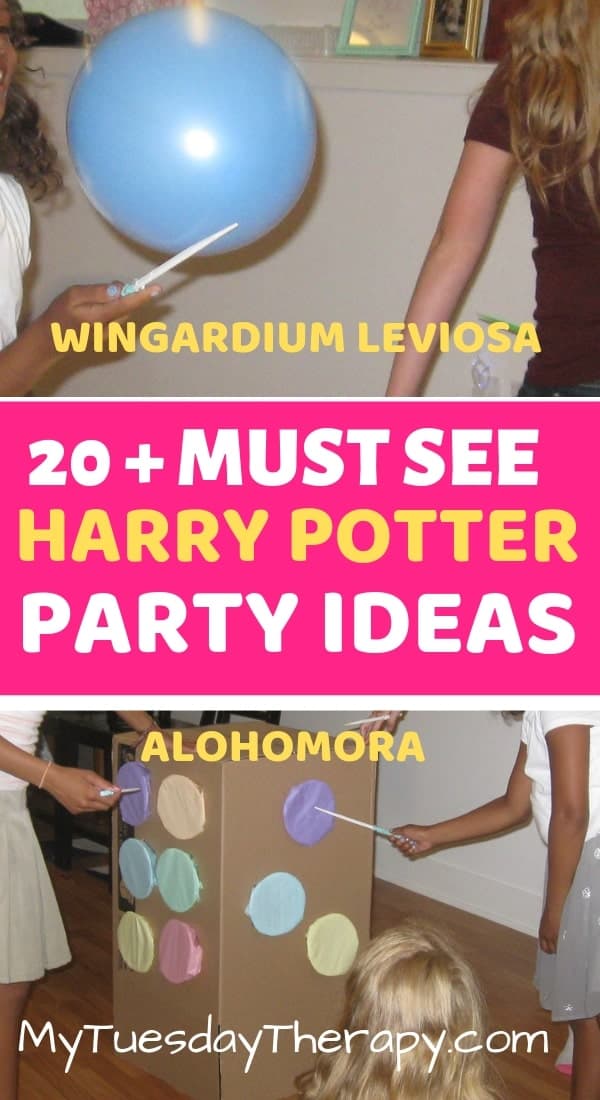 Wingardium Leviosa is a charm used to make objects fly.

You can try it on balloons. My daughter and her friends had fun keeping balloons afloat with their awesome wands.

Alohomora is also known as Thief’s Friend. It is used to open doors and windows.

We made the box (picture above) filled with goodies to practice the Alohomora charm.

Cut out openings for the foam bowls. Fill the bowls with goodies. Cover with tissue paper. Insert into the holes. You might want to glue or tape them to keep them in place.

The kids used their wands and the alohomora charm to open the surprise bowl.

Plant a flower or herbs for everyone to take home. Or make cute moss creatures. 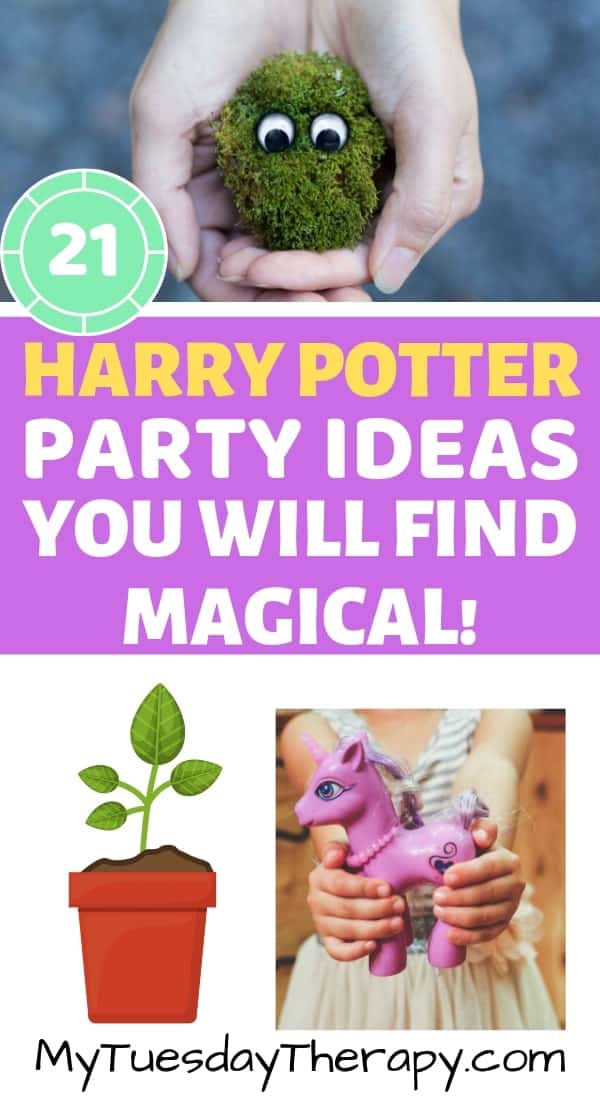 5. Games and Activities in Common Rooms

Create Hogwarts Common Rooms with the easy ideas in the HARRY POTTER PARTY ON SMALL BUDGET.

Each Common Room is so different from beautiful airy, starry-sky Ravenclaw Common Room to creepy, greenish Slytherin Dungeon under the lake.

We hosted a fun party where the kids were guests of a particular Hogwarts house. They spent a lot of time in that common room but also visited the others to play games and do other activities. Check out HARRY POTTER ACTIVITY IDEAS.

Get Marauder’s Map Cribbage Board from Unique Wood Products 1 and let the race begin! Collect points for your Hogwarts House as you move through the Hogwarts Castle.

6. Weasley’s Home – The Best House I’ve Ever Been

Is there a cozier place to host your Harry Potter themed party than in the warm, welcoming Weasley House – The Burrow. Even Harry himself said in the Chamber of Secrets: “This is the best house I’ve ever been in.” 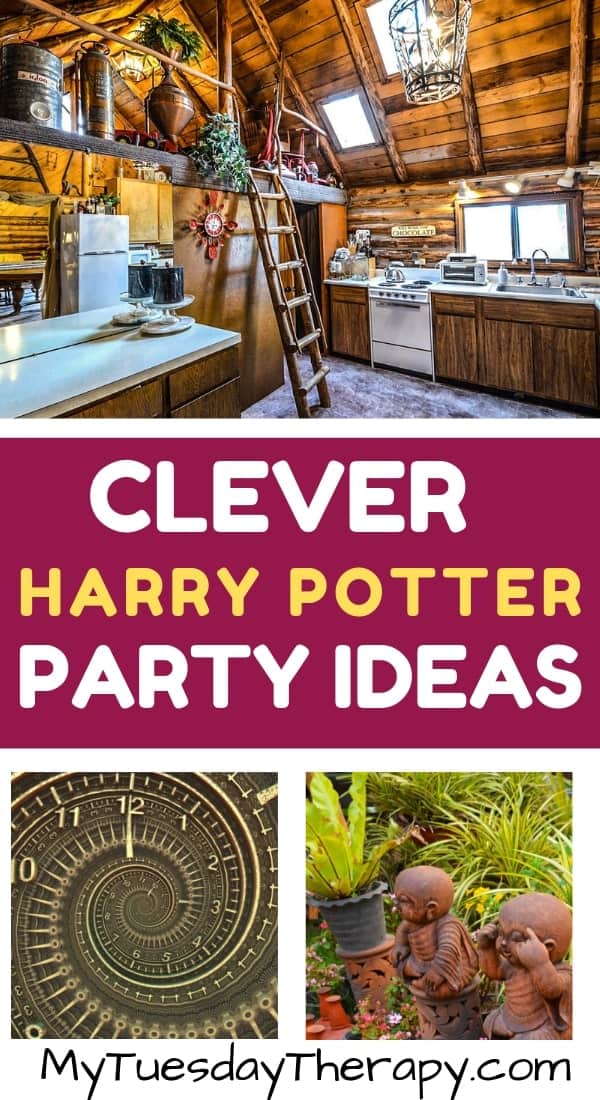 Fireplace in the Floo Network

If you don’t have a fireplace you can find a fireplace video on youtube and display that. Or make one from a cardboard box and use red Christmas lights for fire.

Place a jar of Floo powder next to the fireplace.

Weasleys had odd clocks. The clock in the kitchen told things like “time to make tea” or “you’re late”.

The Weasley clock was in the living room. It had nine golden hands one for each member of the family. This clock showed whereabouts of each family member.

Weasley family had quite feisty garden gnomes and every now and then they de-gnomed the garden.

De-gnoming could be one of your party activities.

Hide gnomes (print or draw them) in the party area and send the kids looking for them. Who finds the most wins.

3D Puzzle of the Burrow

You’ll have a great time working together on a 3D puzzle featuring the Burrow.

Other Items for Weasley Home Look

Send also the invitations Weasley style and cover the envelope with stamps. Or send a howler…

Remember the excitement when Harry Potter, in his fourth year, was one of the contestants in Triwizard Tournament — a magical sporting event between three wizarding schools.

As the guests arrive ask them to write their name on a paper and place it in the Goblet of Fire. 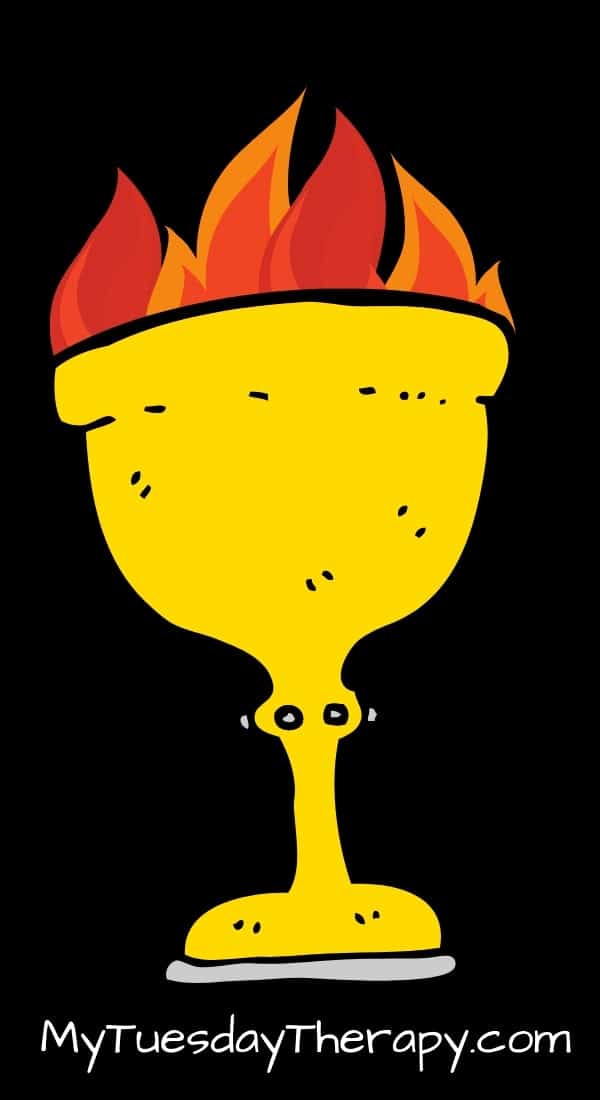 How to Make Goblet of Fire

And like magic you have a Goblet of Fire DIY!

Depending how you want to run your Tournament Party you could either select three contestants at a time by pulling their names out of the Goblet of Fire or read out everyone’s names at once. 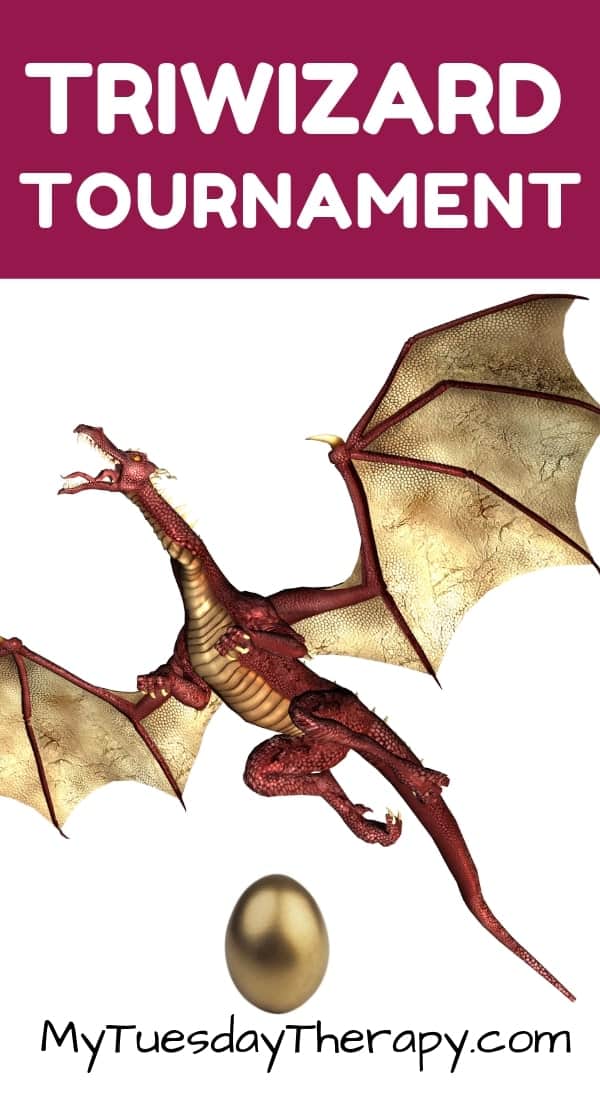 Harry and the other contestants had to fight a dragon that was protecting the golden egg. Each contestant faced a different dragon.

You probably don’t have dragons but can create other obstacles.

Maybe set up a dragon bowling course. The players need to reach certain point level to get to the egg.

Hot glue plastic dragons to bowling pins. And there you have your awesome Dragon Bowling Pins for your amazing Harry Potter Triwizard Tournament Party!

In the story there was a clue inside the egg about the next task. You could also fill it up with a little sweet surprise.

2. Find a Treasure Under Water 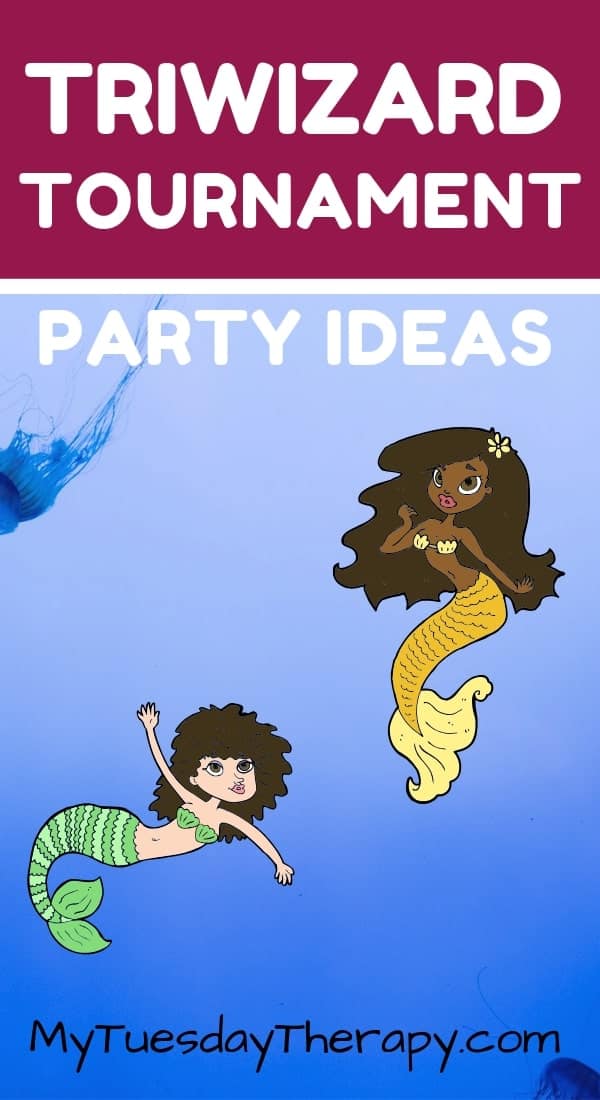 
In the Harry Potter story, each contestant had to rescue a loved one whom the mermaids were guarding.

To keep everyone safe: Do not tie anyone to a pole underwater. Okay. Now that we have made sure that nothing like that is going to happen we can move on to the task.

It would be awesome if you have a pool or can host the party at lake.

Attach mermaids to floats (so they don’t sink) to “guard” the treasures.

Scatter diving toys in the pool. Send the kids looking for them.

3. Find the Triwizard Cup In a Maze 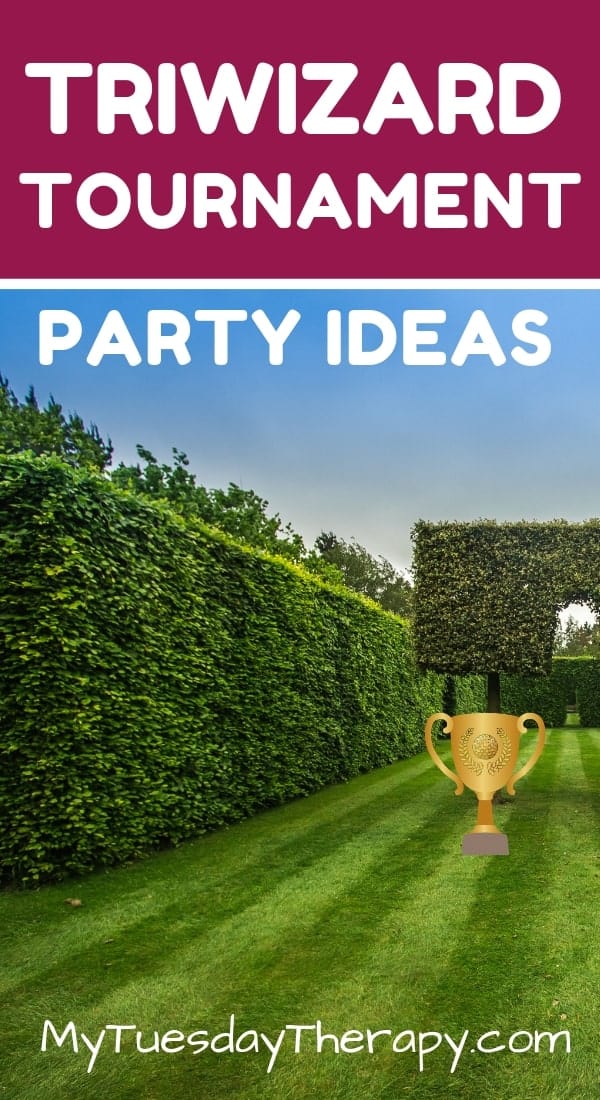 And the final task is going through a maze in search of Triwizard Cup.

This could be done as a scavenger hunt with clues and tasks.

This Harry Potter themed party will be so much fun! A party that I could see teen boys liking too… if you can make it challenging enough.

The Yule Ball is of course a chance for us all to — er — let our hair down. -Minerva McGonagall (Harry Potter and the Goblet of Fire)

All the students fourth year and above were invited to this grand celebration on Christmas Day.

Your guests will be delighted to receive these creative Yule Ball invitations. Get the printable from Mianne Market.

Decorate your ballroom with Christmas lights. Tape them to the ceiling or hang them from the curtain rods for a beautiful effect.

Host a feast and serve delicious food such as goulash and stew just like they did at Hogwarts. Or have snack tables at the ballroom to keep the crowd fed and happy.

A gorgeous Christmas staircase backdrop creates a stunning atmosphere for your Hogwarts Yuleball.

Maybe you won’t be able to recruit the Weird Sisters band but a fabulous playlist will keep the guests dancing and having fun.

how to play “do all the moves”:

Join My Tuesday Therapy Subscribers and have awesome party and activity ideas delivered to your email inbox! 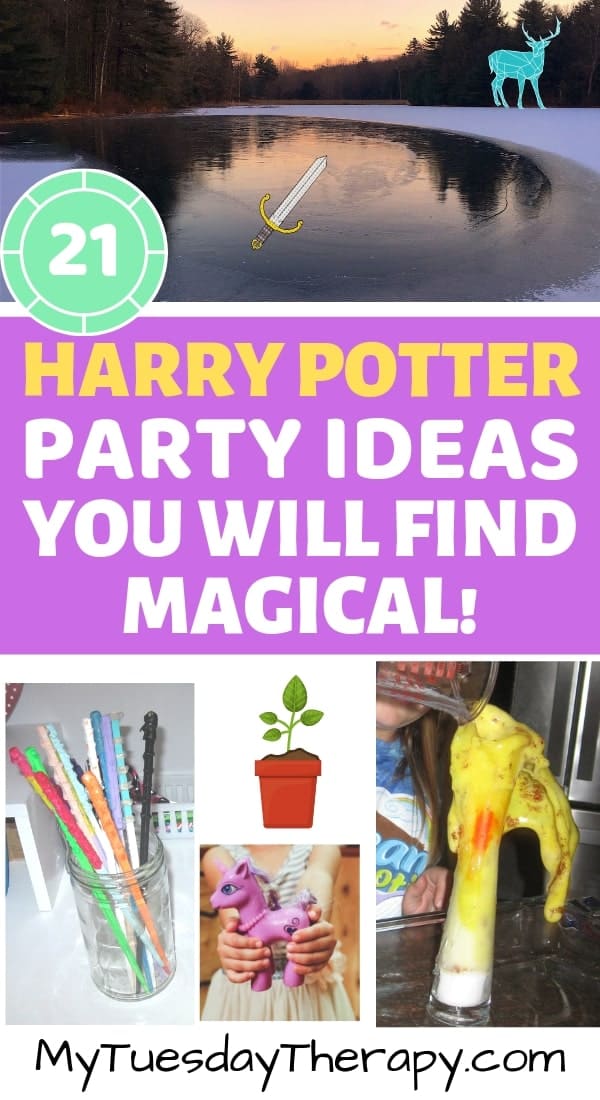 Welcome to Great Memories the Easy Way a.k.a. MyTuesdayTherapy.com.

After all, parties should not make you feel like you need therapy unless it is MyTuesdayTherapy :)

Check out fall fun ideas and get ready for the Holidays.